I don’t watch much news these days– maybe an hour a day, compared to just a year ago when I watched news all of the waking hours of the day.

I used to watch MSNBC for the comedy factor. Now, though, I can’t stand MSNBC for even five minutes, since they no longer seem to try to hide the fact that they are one big campaign donation to the Democrats.

So now I watch… ugh… Fox. I can’t stand it, either. There are a number of reasons. Here are the first two that come to mind. They seem to cater to foot and leg fetishists. Just do a Google image search for any female Fox host. The volume of leg and foot photos should be enough to justify the massive expense of installing a desk. Any news agency that chooses not to prioritize news delivery, but instead participates and encourages the objectification of their employees, earns their reputation.

The other reason I can’t stand Fox is that they find it perfectly acceptable to allow their male “on air” talent to omit a tie and leave their top button open. This instills the credibility of Leisure Suit Larry. Nothing says trustworthy news delivery like a guy whose work clothes looks more like that of a date rapist than a broadcasting professional.

Anyway, onto the main subject of this post: Shep Smith’s new set.

This is quite possibly the stupidest set I have ever seen. Here it is, in case you haven’t seen it: 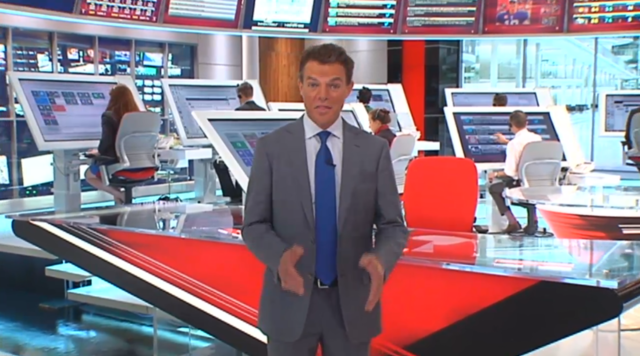 When I first saw it, I thought it was a joke. It looks like a Mac Lab for giants. Don’t believe me? Here:

The other thing that bugs me is that I can see wires on the set, running from the big round glass table. If you are going to invest in a nearly all-white studio, in an attempt to have a clean set with nice lines, why can I see wires on their set? Why can they not just lift the floor 2 inches, allowing wires to run out of view? It reduces the trip hazard, and looks a lot cleaner. It gives the set an amateur look.

Also, does anyone know if Shep Smith is a smoker? I don’t care if he is or if he isn’t, but he seems to lose his breath while walking around his studio, delivering “news.”

And I am very hesitant to mention the last item on my list because it is fashion advice. I am not one to give fashion advice. I own one pair of shoes, and maybe a tie. I am yet to wear a suit in this millennium. But what I do know is that there is a rule to fashion for men when it comes to suits and patterns. Shirt, Tie, Jacket: Only one may have a pattern; the other two must be solid colors. If you ever wondered why the person reading the news to you seems like a clown (I’m looking at you, Trace Gallagher), this is why. At a subconscious level, it is hard to consider someone as being credible if they can’t even dress themselves properly.

Is anyone else tired of hearing about the Obamacare tax registration fiasco being called ‘glitches’?

Call them bugs. Call them problems. Call them errors. Call them whatever you want, but if you call them “glitches,” it only demonstrates that you do not understand what a “glitch” is at a conceptual level.

A glitch is an unexpected error. When a glitch occurs, the issue either self-corrects, or the system carries on with no major impact. The cause of a glitch is difficult to find, even though the solution may be infinitesimally small.

Examples of a glitch:

Did you see the TV screen just flash black really fast? Must be a glitch.

Did you hear that strange bit of digital noise in the middle of that song? Must be a glitch.

The mechanic couldn’t find anything wrong with my engine. It must have been a glitch.

Examples of not a glitch:

My TV is smoking. It must be a glitch.

My car’s engine seized up. Turns out that a new employee at the oil change place forgot to put oil in cars for a week straight. Apparently there was there was a training glitch.

He died after his heart stopped beating. Must have been a glitch.

See the difference? With a glitch, things continue as normal, or mostly as normal. With something that is not a glitch, the subject, without extreme intervention, comes to a screeching, irreversible halt.

So again, I repeat…

Some of you may have noticed that I have not posted much lately in my “sucks” series. Believe me, that is not because companies no longer suck– they do– but mainly because it takes quite a bit of time to post accurately and truthfully in order to prevent potential litigation. For example, today’s subject is iHeartRadio / ClearChannel. They bring in about $6.25B annually, which is just slightly above our income. Does it mean they don’t suck? No, but I have to make sure that my assertion regarding their suckage is an accurate one. It does help that my “sucks” posts are not meant to drag a company down, but to give them an opportunity, and the necessary information, to not suck as much.

So to iHeartRadio and ClearChannel, I have a comment: You suck. I also have a question: Why do you suck so much? Let me explain.

I bought myself a shiny new Asus Google Nexus 7 FHD tablet. According to my cursory research, this is one of the hottest selling Android tablets. I have read estimates claiming that since last year when the initial Nexus 7 was released, nearly 50 million Android tablets have been sold. Of those 50 million, 10%– or 5,000,000– were Nexus 7 tablets.

That is why it comes as a shock to me that iHeartRadio and ClearChannel suck so bad as to list iHeartRadio in the GOOGLE Play store, but not support the GOOGLE Nexus 7. As I was told by “Rick,” part of iHeartRadio’s no-support team:

The only tablets that we support are:

First, let me explain that it took 40 days of back and forth with iHeartRadio for them to admit failure by denying that they offer an Android version of their software. iHeartRadio’s support sucks so bad that there is virtually no way to get support. Email the address on their website? No response. Email the address listed under their App page in the Google Play store? (“Have a suggestion, question or concern? Please email us at help@iheartradio.com and we’ll be happy to assist you.”) No response. Start a question on their quasi-discussion support board? No response. It seems I only received a response after I posted a 1-star review of their software at the Amazon App Store.

Now, when I am at the GOOGLE Play Store using my GOOGLE Nexus 7, and I browse to the iHeartRadio app, it says very clearly, “This app is compatible with all of your devices.” That’s a good thing, since there are 5,000,000 people with a GOOGLE Nexus 7 who might want to install iHeartRadio from the GOOGLE Play store. Obviously, though, the above quote from Rick the guru says it’s not compatible.

Why would a company with $6.25B in revenue release an app into the GOOGLE Play store without ensuring that the app is compatible with GOOGLE’s flagship product, the GOOGLE Nexus 7? In my opinion, it is because, like many massive corporations, iHeartRadio and ClearChannel suck.

Why would iHeartRadio and ClearChannel executives not be incredibly concerned that they are intentionally ignoring 5,000,000 potential listeners?

They must not realize that tablets and portable devices are extremely popular with their key target demographic segment. They also must not realize that people under the age of 30 are likely to have not turned a radio on in years, if ever. If iHeartRadio / ClearChannel wants these listeners, they need to ensure their apps are compatible with the devices these listeners use– and they aren’t t AM/FM radios.

To add insult to injury, they perpetually advertise iHeartRadio on the radio. They must chew up millions in advertising time annually that could be sold to someone else instead of being used to promote iHeartRadio.

The only reasonable explanation I can surmise is that the iHeartRadio / ClearChannel executives must be extremely out of touch with their development team, and their target audience. Maybe that is why it seems talk radio is stuffed to the brim with scam gold commercials these days.

By the way, re-read the supported devices. Apple, Amazon, and… WebOS? Seriously? iHeartRadio and ClearChannel, in all their suckage, can support an operating system that has not had a release since January 1, 2012, but they suck so bad that they can’t support the 5,000,000 GOOGLE Nexus 7s? They support an unavailable device that was sold off in a fire sale a mere 49 days after it was released (in August 2011), but they don’t support a device that is being actively marketed and sold?

iHeartRadio / ClearChannel, you guys sure seem to suck pretty bad. You don’t seem to understand the technologically changing world, and even if you do, you seem to be far behind the curve. That’s ok, though– I hear that the new iHeartRadio app for the Amiga 1000 will be out soon. If that doesn’t happen, I can just listen on my Palm Pilot (hah!).

The funny thing is that I want to listen to ONE radio station, and only ONE radio station: 1290 AM, WTKS. Their signal bleeds terribly with 1230 WSOK, and their FM mirror (97.7) provides quite possibly the worst FM reception I have ever experienced.

I am just about at the point where I will be abandoning radio altogether. It’s a shame. I have been a huge talk radio fan for about 20 years, since I was about 15. A bigger shame, however, is that iHeartRadio / ClearChannel sucks so bad that the current crop of 15 year old kids will likely not be exposed to the wonderful medium that is talk radio.

Radio will go the way of newspapers, and iHeartRadio / ClearChannel will likely be a big part of that. They will have nobody but themselves to blame.

To anyone from ClearChannel / iHeartRadio that may end up reading this, feel free to comment and start a dialogue if you wish to have my (free) cooperation and assistance in ensuring the app you listed in the GOOGLE Play Store is compatible with the flagship GOOGLE Nexus 7.

I’m done with you. That is all.